Whether this disconnect can be bridged remains to be seen, but an explanation is in order so that both sides can at least understand the opposing viewpoint. For centuries, the Ruling Class has travelled aboard and seen unmitigated misery in the Third World – starvation, torture, ignorance and endless unnecessary deaths. While colonialism has existed since humans walked erect, it was the English and to a lesser extent other European powers, who first viewed their hegemony as not simply a mandate to plunder, but as an opportunity to better the lives of those they had conquered.

Thus, European conquerors required those governing their colonies to learn the customs and language of its subjects. It worked. Many colonies saw huge strides in education, food production, road construction, energy efficiency and representative governance. But there was a problem. Those conquered were humiliated and outraged. The human brain is programmed to prefer poor governance from its own kind rather that competent governance from outsiders. As rebellions mounted, colonialism ended. Countries that tolerated colonialism longer were more likely to have intact democratic and economic institutions. Thus Barbados, Bermuda and India are thriving. Haiti, the only successful slave revolt in history, is a disaster.

Thus, the Western Ruling Class came up with a new model – propping up dictatorships. By this time, American hegemony had been established and we proceeded to put puppet governments in countries that could not quickly convert to democracy. The Shah of Iran was a classic example, put in power by the American CIA in 1953. Again, this model worked. Iran was prospering with vast economic improvements over a short period of time. But the same problem arose. The Shah was correctly perceived by Iranians as an American puppet and overthrown. Now Iran is a theocracy.

The Ruling Class pivoted again, advocating free trade and open borders so that the poor in the Third World could not only have better jobs, but could move and live in Western countries.  This worked too. Workers in China and India saw rapid increases in wages while those who managed to immigrate to the Western world – whether legally or illegally – realized a rapid improvement in their standard of living. But now a new problem emerged. The middle class of the West saw their wages stagnate as they were forced to compete with both immigrants and workers in other countries.

This is why America’s Ruling Class awoke November 9 and collectively put its hands on its cheeks like the individual portrayed in Edvard Munch’s iconic portrait The Scream. Donald Trump was now President. 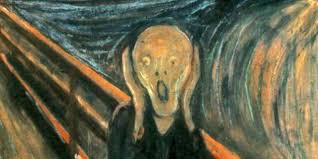 What model will emerge from this? Who knows? If the Ruling Class can successfully negate President Trump’s election, as it is working overtime to do, globalism may return with some modifications to placate the middle class. But if Trump persists, a new economic nationalism may emerge where America and Europeans pursue their own interests and leave other countries to their own devices. Can this model work in the Nuclear Era? Stay tuned.