Just as in 2016, the 2020 polls underestimated President Trump’s support. While polling has become more difficult in the age of cell phones and caller-ID, it is mathematically impossible not to conclude that these polls were either deliberately inaccurate or conducted by incompetents.

With more flips, the distribution of the number of heads resembles what the mathematicians call a “bell-shaped curve” that centers around 50%. This not only applies to something as simple as flipping a coin, but to more complex situations such as what team is going to win a sporting event (which is why the bookies always win) and who is going to win an election. When a lot of data is available, a bell-shaped curve is generated. 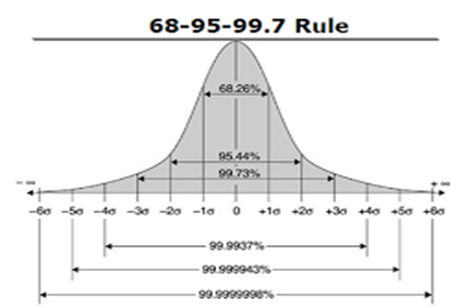 This concept is illustrated in the accompanying graphic. But what is fascinating about this graphic is that mathematicians can also tell you the chance that your data may be wrong based on the concept of “standard deviation,” which is represented but the Greek letter sigma on the horizontal line.

But what is the chance of flipping a coin 1000 times and getting heads 44% of the time or less – in other words, four standard deviations or more? As you can see from the graphic, this happens only 0.0063% (100% – 99.9937%) or about 1 in 16,000! In other words, if you flipped a coin 1000 times and only got heads 44% of the time or less – the overwhelming odds are that you are dealing with a coin that was weighted to come up tails more often that heads rather than this happened by random chance.

Now if you have somehow managed to make it this far without dozing off, let’s apply this to polling. Polls do not use the term standard deviation; they use the term “margin of error.” By convention, the margin of error is defined as two standard deviations, or 95%. Thus, if you read a poll that says that Candidate A will garner 55% of the vote and the margin of error is 3%, this means that on election day there is a 95% chance that Candidate A will receive between 52% and 58% of the vote.

The narrative being pushed by the media and the pollsters is that better methodology is required. But the overwhelming odds are that these polls had a liberal bias and were issued to shape opinion, rather than reflect it. Expect these “reputable” pollsters to repeat the same scam the next election cycle.